During a particularity difficult time last year, 5 of my friends came to my home and quilted with me every month.   I posted about  it in “Surrounded by Friends”.

Here is another finish from that quiltalong…. Lynn used modern fabrics.  I just love the fabrics she chose.  She finished the quilt so it could hang in our latest guild show.

I always find it amazing how the choice of fabrics can alter the same quilt pattern so entirely.

Here are pictures of the other completed quilts…… we’re still missing one Nora.

I made this quilt during my contemporary phase…..somewhere around 2005. Prior to the Modern quilt movement.   I was not being challenged by traditional quilts and sought something new.

I looked through so many contemporary books, but wasn’t sure I could do them because I can’t “draw” for the life of me…. I don’t remember the title of the particular book this pattern was in, but when my hectic summer finishes and I clean and sort the studio, I will find the book and post the author.  It has many more wonderful ideas in it.

What I do remember about this quilt is the fun I had making the leaves. Also the fun I had breaking the “traditional” rules.   Because I was left to my own imagination when it came to fabric choices,  I was a bit  braver than normal.

Because the leaves are 3D and floating on their backgrounds, I wanted something that would hold it’s shape.  I searched my stash and found various shades of fleece.  I had been using that as backing to some corduroy quilts I had been making from old pants.  I fused 2 layers together and then free hand cut the leaf shapes.  Such freedom…

Now what fabrics did I have in my stash that would highlight those leaves? I found some sage green Dupioni  silk and some pin whale corduroy.  Did I dare mix fleece, Dupioni silk and pin whale corduroy in a quilt?  What would the quilt police say?  At this point I got really brave and said….”I don’t care.  I’m using them anyway!”

The fleece leaves now float on pin whale corduroy.  The spine of the leaf is the only place the leaf is attached to the background.  These individual leaves are framed with Dupioni Silk.  I love the shinny affect of this silk.   The outer border is pin whale corduroy.  I used the rest of my fleece for the backing.  Because of the weight of these fabrics, there is no batting.

Minimal quilting was done to stabilize the quilt.  I remember thinking “when I get better at machine quilting I will come back and do some detailed quilting  on the silk”.  That never happened.  It’s home now is in Calgary with my oldest daughter.  I sleep under it when I visit.

I’ll be linking up with Sandra at mmm!quilts

Each month Becca at Pretty Piney offers a Design Dare.

Using this photo and the accompanying colours,  design a quilt, and whether you actually make it or not is up to you!

Can’t wait for the linky party to see what you all have created.

I just love getting a squishy in the mail.  I picked it up at the mail box just before going out,  so I had to reign in the excitement until I got home.

Lovely low volume charms.  Aren’t I a lucky girl.  It’s my birthday next week and I feel like the presents have arrived early.  Thank you so much  Nicole for the very generous addition to my low volume bin.  They will hold a special place in my quilts as a reminder of the wonderful people we meet through our blogs.

After writing that blog about finding more history behind my Mother’s Key West quilt, I was reminded that many years ago I had started a quilt that was similar …..

It was called “Whirl” by Mary Maguire.  Mary’s colours are soft florals with stripes meeting in the corners to produce a pin wheel effect.  I think it could also be described as a kaleidoscope quilt.

I never have been a “soft floral” type, so I looked in my stash. What striped fabric did I have.  At that time my stash contained many yards of fabric from back in the days when Fabricland had a buy 1 yd get 2 yd free.  (What year did we change to metric?)  There were four different prints in the line, so I bought 1 yard of each and came home with 12 yards of fabric.

I remembered there was a striped fabric in there.  This collection of fabric would be great.

Like so many of my projects, it became a UFO and was relegated to the back of the shelf.  I think I had completed 10 blocks.  I really can`t say how many years it sat there, but when looking at Mom`s quilt and talking about the pattern,  my inspiration to finish the quilt was awakened.

I was fortunate to be able to spend time at a cottage with a quilting friend the second week of July.  We had a great time swimming, eating and quilting.  Our machines were set up in the living room to entire week.  One of the projects I brought to work on was my `whirl` quilt.  I managed to get the other 10 blocks finished and the rows sewn together.  Here is the result………….

It still needs a border.  Now that really is my question to you all.  Which of the fabrics should I use as the border and how wide should it be.  It currently measures 44x 55.

When I showed it off to my 7 year old granddaughter, her eyes just light up and a `WOW! I really like that` was her response.  Just goes to prove that ugly old Fabricland fabric can thrill someone.

What I also discovered while completing the top is……  I was a terrible piecer in the beginning.  No consistency at all.  I`m amazed I got the blocks together without too much distortion.  (Don`t look too close for matching points….a lot of them aren`t there!)

When my longarm comes back from her spa trip to Utah, I`ll put it on the frame and finish the quilting. OR, maybe I`ll get some Pearl cotton and hand quilt a large stitch as Mary suggested….. she used `Pearl Cotton no. 8 with a number 24 chenille needle`.

For my Mother`s quilt……well, I have a friend who loves hand quilting and we trade services…

Has anyone heard those dreaded 3 bleeps when turning on their longarm?  Well it happened to me yesterday.  With one row to go to finish a charity quilt, my machine stopped mid stitch.  I turned it off, then turned it on and got those 3 bleeps and nothing. My heart sank.  I have a call in to service……… we’ll wait and see what the result is.

My HQ sixteen has been my friend since 2005.  I know it’s old (like me), but it has been faithful.  No bells or whistles, but together we sure get the job done.  Not having the ability to quilt feels horrible, like part of me is missing.  I’m hoping just a tune up is required and we’ll be back in business soon.

I just had to show off my O Canada quilt that I completed this year.  The story about my quilt is HERE.  It took a lot of time to create the fabric for these flag blocks, just as it has taken time to enjoy the Canada we enjoy today.

Just recently I had been looking into the history of a quilt top from our local museum.  It was made prior to Confederation (1867) in 1852.  The top quilt was to be given as a gift to Sarah Jane ?  (we thing her surname was Coral).  My area of Canada had already been established by then with the thriving  community Fort York and a surrounding area of rich and productive farm land.

Our local quilt show was recently held in the Sharon Temple.  The Temple was built from 1825 – 1831 by Children of Peace, an Upper Canada Quaker sect .  The Temple is an architectural symbol of their vision of a society based on the values of peace, equality and social justice.  I believe Canadians still hold true to those values today.

Another thing I would like to share is a wonderful song delivered by our famous Canadian astronaut and his brother……Chris and Dave Hadfield.   It really shows how  “down to earth” Canadians can be.

How grateful and proud I am to live in this beautiful country called CANADA.

Have a wonderful Canada Day weekend to all my Canadian friends.  For my American friends, have a great   …..   oops!  I meant Independence Day.   Drive an play safe everyone.

My friend is curating a vintage quilt display at our local museum called Warmth Through the Generations.

I loaned a quilt top my mother had pieced many years ago.  It was tucked away in my cedar chest.  I believed it was from the 1930s when she was teaching in a one room schoolhouse out on the prairies of Alberta.  The blocks were hand sewn together, then the blocks were machine sewn into a flimsy.  I had no idea what the blocks was called, but oh! those pinks and greens.  They do make a quilt colourful.

When my friend came over last week for our monthly quiltalong, she brought along her Barbara Brackman encyclopedia of quilt blocks.  What an amazing book.  Inspiration galore. 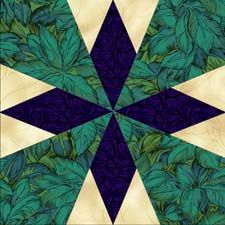 We determined that the block was called the Beacon Star.  It wasn’t quite the same as my Mother’s , but, maybe she just added the corner triangles to make it look different.

“Well serendipity definitely happens. Yesterday I remembered that there was an old notebook in the museum collection that belonged to an old-time quilter…it contained clippings from newspapers and magazines and notes on quilt patterns and motifs. I went in today to add some new labels to the display and decided to pull it out and put it on display. As I was browsing the patterns in the notebook, I came across the exact block pattern of your Mom’s quilt top!!!!!!
It is called Key West Beauty, design #692. The lady who put it in the newspaper was called Carol Aimes. And it was in the Evening Telegram newspaper. The notebook is believed to be ca 1930s. And once belonged to a lady called Arlie Evelyn Penrose.
I googled Carol Aimes….her patterns were in the Medicine Hat Daily News, Alberta in 1938 and 1940….geese (design # 605)  and Scottie dog (design # 722) appliqué’s respectively.
I’ve attached a copy of the notebook page. Yikes I found it!!!!!!!!!! In the Harrisburg PA Telegraph, Dec. 21, 1938. So now you have the date about which she found it!!! Isn’t the internet cool???”

“I googled the pattern name and got the following:

This design is also called Key West Beauty, Key West Star and Dakota Star. The earliest reference is to the Ladies Art Company in 1922. (from Linda Franz Inklingo website)

Here is a paper pieced pattern:http://threadbarecreations.blogspot.com/2016/03/chatelaine-free-bow-sampler-quilt-block.html

And here is regular piecing pattern:http://www.countrycrossroadsquilters.com/2007BOM_Main/200704BOM.html

Lots of images on Pinterest now that we know the correct name!

How cool is this?!? So much fun finding this. Enjoy!”

NOW, I know what the pattern’s name is, approximately what year it was made, and that it was published in an Alberta paper….. All these things confirmed my original story.

BUT, something didn’t sit right.  In 1938 my mother and father were married down here in Toronto before he went off to WWII.  So, I’m guessing she didn’t piece this quilt out in Alberta.  Another memory suggests it was pieced in Toronto because Mother was part of a group called “The Stitch and Chatter Club”.

I’ll never know the real truth.  I should have paid better attention when Mom was telling me the stories. But as a young mother, I had more important things to do…..or so I thought at the time.  Now, I’d like to be able to ask her all these things and I can’t.